Our product candidates include:

Our most advanced discovery and research programs:

Our portfolio of novel agents targets multiple resistance mechanisms by leveraging our specialized expertise in the following areas:

GR is a nuclear hormone receptor that mediates responses to glucocorticoid hormones involved in regulating a range of cellular functions, such as metabolism, cell growth and differentiation. Roughly in parallel, two distinct and uncorrelated mechanisms of GR-mediated resistance to anti-cancer therapies began to be studied by oncology experts. The original hypothesis for our lead program targeting GR was borne out of work conducted in the laboratory of Dr. Sawyers at MSKCC in search of explanatory factors underlying resistance to anti-androgen prostate cancer therapies, including Xtandi® and Erleada®. His work demonstrated that GR signaling is a bypass mechanism to anti-androgen therapy, with GR taking over for AR signaling, and that increased expression of GR in prostate cancer is correlated with resistance to Xtandi. Similarly, GR has also been studied for its potential role in mediating resistance to chemotherapy, though in this case, the mechanism appears to be related to GR’s role in imparting a “pro-survival” phenotype on the tumor via certain biological processes like epithelial-to-mesenchymal (EMT) transition and anti-apoptosis. We and others have shown that GR is overexpressed across over 20 advanced solid tumors including prostate, pancreatic, triple negative breast (TNBC) and ovarian cancers, and that GR overexpression is associated with worse survival outcomes for patients treated with anti-androgen therapies in prostate cancer and chemotherapy in other solid tumors.

Our lead product candidate, ORIC-101, is a potent and selective small molecule GR antagonist designed to inhibit GR transcriptional activity and block pro-survival signals downstream of its activation that confer resistance to anti-androgen therapies and chemotherapies. Since its initial discovery at ORIC, we have rapidly advanced ORIC-101 through preclinical studies that have informed the design of a robust clinical development plan. Following the successful completion of two Phase 1a trials in over 50 healthy volunteers, we initiated in 2019 two separate Phase 1b trials of ORIC-101 in combination with: (1) enzalutamide in metastatic prostate cancer and (2) nab-paclitaxel in advanced or metastatic solid tumors. These trials are intended to establish safety, pharmacokinetics, pharmacodynamics, preliminary anti-tumor activity and a recommended Phase 2 dose of ORIC-101 in combination with each of these therapeutics.

More information about our clinical trials is available here.

Many cancers usurp the anti-inflammatory adenosine pathway to avoid detection by the immune system, thereby reducing the effectiveness of certain chemotherapy- and immunotherapy-based treatments. Accumulation of adenosine in the tumor microenvironment is implicated in local immune suppression that leads to tumor growth. CD73 is an enzyme that controls the rate at which extracellular adenosine is produced and its overexpression is associated with poor prognosis in several cancers, including TNBC, NSCLC, melanoma and prostate, among others. Our second product candidate, ORIC-533, is an orally bioavailable small molecule inhibitor of CD73 that has demonstrated more potent adenosine inhibition in vitro compared to an antibody-based approach. 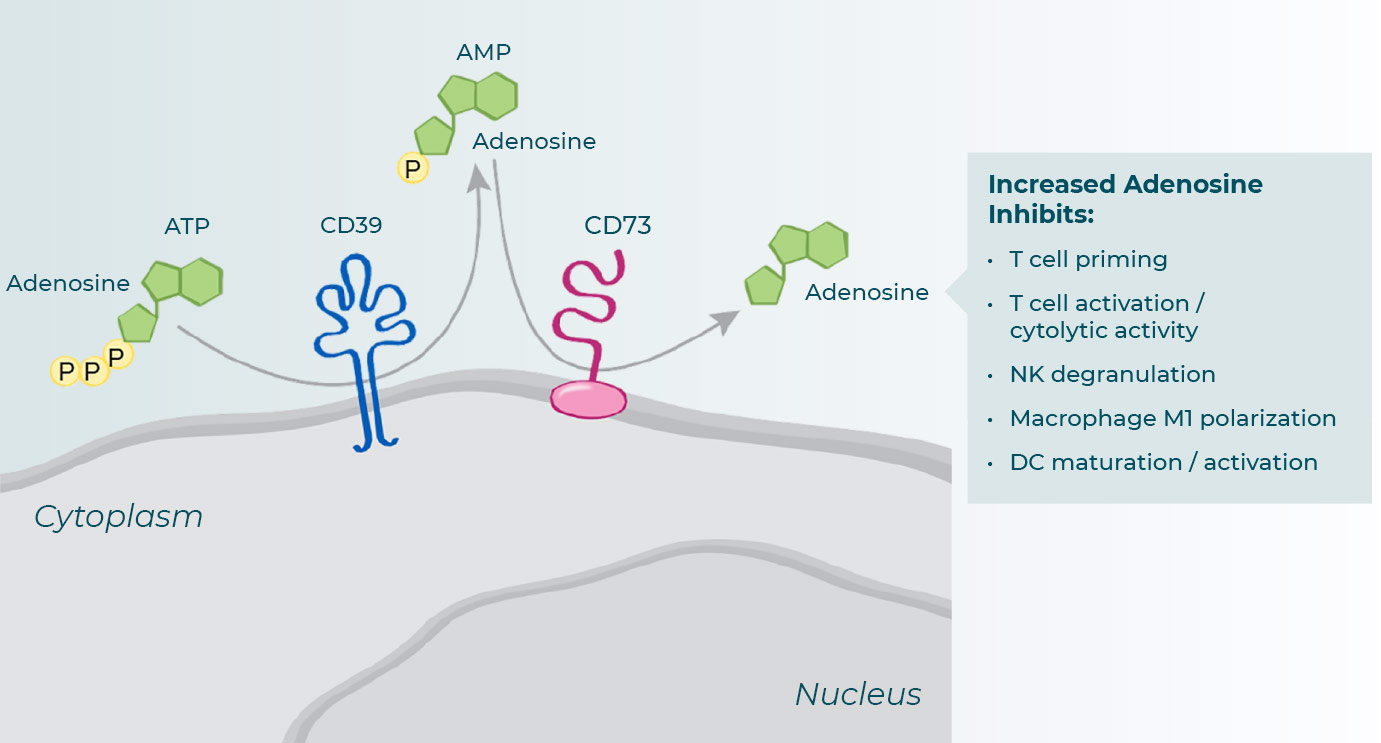 The dysregulation of Polycomb Repressive Complex 2 (PRC2) methyltransferase activity can lead to tumorigenesis in a wide range of cancers including prostate cancer, breast cancer, and hematological malignancies. EED is a core component of PRC2 and allosteric inhibition of EED impacts the assembly, stabilization, and activation of PRC2. Several companies are developing EZH2 inhibitors; however, the pharmacologic properties of these compounds result in high doses that achieve only partial target inhibition in the clinic. Additionally, preclinical studies suggest drug resistance to EZH2 inhibitors may develop via EZH1 bypass compensation or acquired mutations in EZH2. ORIC-944 is a potent and selective allosteric inhibitor of PRC2/EED and is efficacious in enzalutamide-resistance prostate cancer models in preclinical studies. 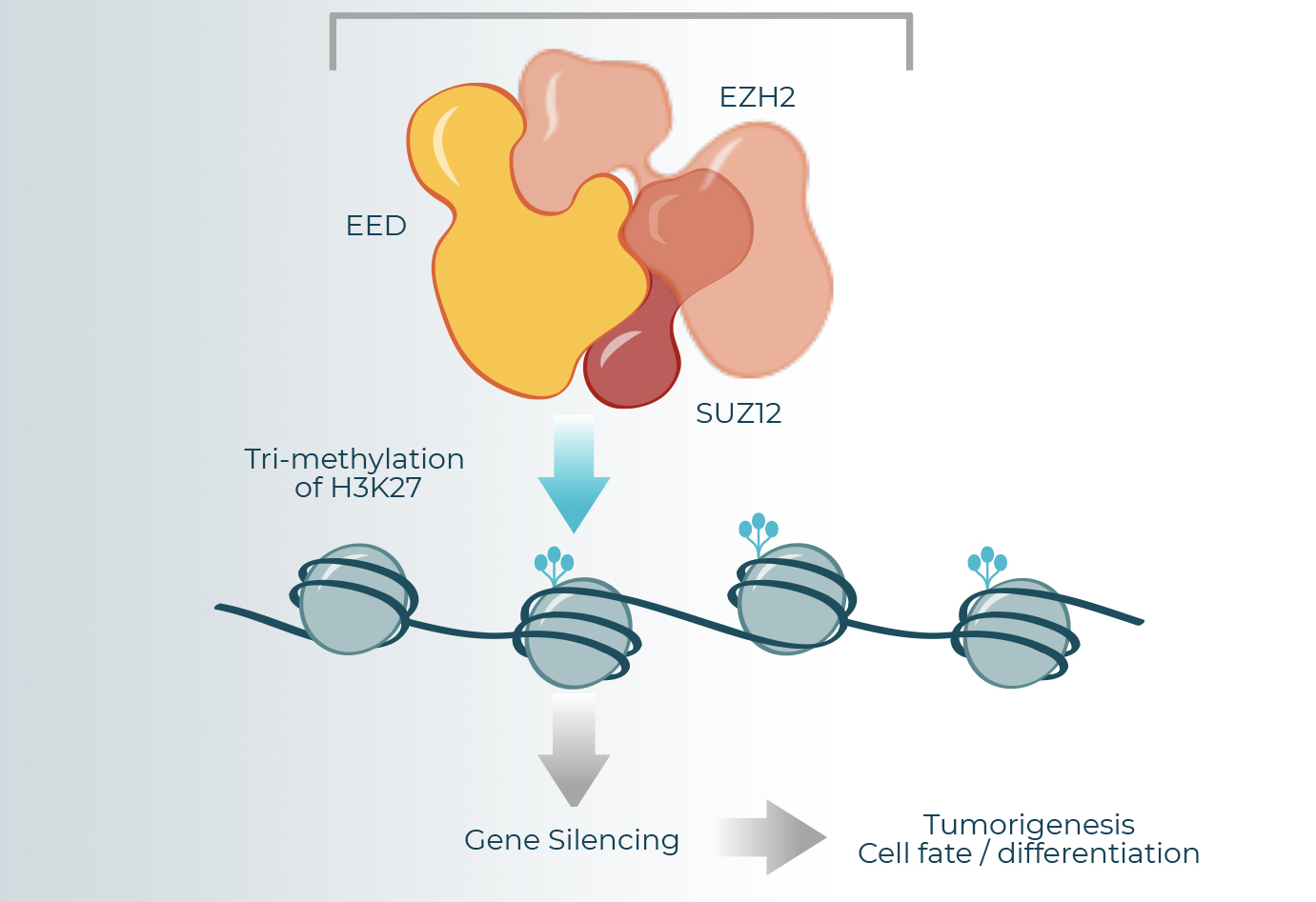 PRC2 Background
PRC2 is a validated oncogenic target across several cancers with promising
therapeutic potential in prostate cancer, among other indications

ORIC-114 is a brain penetrant, orally bioavailable, irreversible inhibitor designed to selectively target EGFR and HER2 with high potency against exon 20 insertion mutations. ORIC-114 has demonstrated greater brain exposure in preclinical studies compared to other compounds being developed against exon 20 mutations and demonstrates strong anti-tumor activity in an EGFR-driven intracranial lung cancer model. Currently, there are no medicines approved by the FDA to treat tumors with EGFR or HER2 exon 20 insertion mutations. ORIC expects to initiate a global Phase 1/2 tumor-agnostic trial of ORIC-114 in genetically defined cancers in the second half of 2021.

In addition to our product candidates, we are leveraging our resistance platform in pursuit of multiple discovery research programs that focus on our expertise within hormone-dependent cancers, precision oncology and key tumor dependencies. These programs highlight our medicinal chemistry and structure-based design expertise, thus for the most part utilize a small molecule therapeutic approach to target oncogenic drivers in solid tumors like prostate, breast and lung cancer that relapse with innate, acquired or bypass resistance. Our most advanced discovery research programs are currently in lead identification and undergoing in vitro studies.